Mood swings happen. One minute you’re upbeat and happy, and for no reason at all, (we can’t always blame lack of coffee), we’re anxious and irritable.

For some, mood swings can occur simply because we’re hungry (take my word for it, ‘hangry’ is a real thing).  For others, stress, weather, unseen triggers and external stimulants can all affect our mood. But for some folks, their mood swings can affect relationships, work and family life.

Mood swings are most often caused by neurochemical irregularities in targeted areas of the brain, most commonly in the limbic system (hypothalamus, hippocampus, and amygdala), which is the region responsible for regulating emotional conditions like stress, anxiety and depression (1).

Endocannabinoids and their receptors have been found abundantly within the limbic system, meaning cannabinoids like CBD are very likely to play some sort of central regulatory role in establishing and maintaining emotional health at the chemical level.

In fact, studies have shown neuronal tissue endocannabinoids (cannabinoids located in the hippocampus and amygdala), to be directly responsible for the release and regulation of monoamine neurotransmitters, which are the star players in mood regulation and emotional stability and wellbeing (2).

Like we said, mood swings happen.  However, there is a definitive line separating normal mood swings and mood swings that are far more severe and/or more frequent. 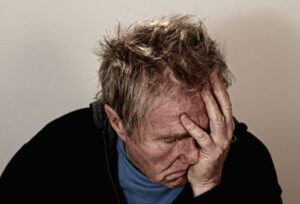 Though the full chemical spectrum of mood regulation is not fully understood, it’s known changes in emotion and mood are regulated in large part by the neuromodulatory action of serotonin and dopamine. Irregularities in the presence of either one (or both) of these chemicals can cause wild and unpredictable shifts in cognitive behavior, the pleasure/reward system, and overall emotional response.

Specific conditions such as bipolar disorder, cyclothymic disorder (which is similar to bipolar but less severe), and major depressive disorder are known to result in neurotransmitter dysfunction. Also, things like hormone irregularities have been widely understood to result in chemical imbalances in the brain, which can directly lead to the erratic emotion fluctuation of mood swings (this is typically most common in adolescents and pregnant/menopausal women).

Substance abuse has been directly related to drastic mood shifts that are brought on by neurochemical imbalances like stress, changes in diet/sleep patterns, and diseases such as attention deficit hyperactivity disorder (ADHD), epilepsy, and autism. Certain medications like antidepressants, appetite suppressants, and anti anxiety drugs have even been known to affect serotonin and dopamine levels in the brain, and can directly result in “manic episodes” that are symptomatic of bipolar disorder.

In regard to identifying the difference between “healthy” mood shifts and unhealthy/unnatural ones (ones that are brought on by chemical imbalances), it’s typically suggested that frequent and extreme happiness to extreme depression are indicative of some kind of neuronal imbalance (not to be confused with bipolar disorder). These wild and fluctuating emotions can result in feelings of happiness so intense individuals can’t help to control things like excessive spending, creative urgency, and even out-of-ordinary sexual drive.

Drastic mood swings can often be treated with simple lifestyle changes. Things as fundamental as improving diet, exercise and sleep habits can have a massive impact on emotional health, and should be the first method of treatment prior to any kind of medication dependence.

Unfortunately, physicians and psychiatrists often end up resorting to prescription medications in order to re-establish proper neurochemical levels in the brain.

Drugs like selective serotonin reuptake inhibitors (SSRI’s) include labels such as Prozac, Zoloft and Paxil. While moderately effective, these medications have been known to produce wildly different responses from individual to individual, as well as highly dangerous side effects that can include severe depression and thoughts of suicide.

Living with mood swings or bipolar disorder can be fully and utterly life changing and debilitating, leaving the person who is suffering to seek any sort of relief.

As mentioned in the introduction, serotonin and dopamine levels in the brain are controlled and regulated by endocannabinoids within the central nervous system’s ECS. This is a good indication mood swings are a byproduct of endocannabinoid deficiencies and may to able to be treated with CBD oil.

While studies are still in the early stages, CBD oil is an option more and more people are turning to.

Products with CBD oil (edibles, topicals, creams, tinctures and vape oil) contain all of the therapeutic and healing properties of cannabis, without producing the stereotypical “high” that’s commonly associated with the drug. When choosing a CBD product for yourself, it’s important to make sure you are ingesting pure CBD oil and there is little to no THC in the product.

Enhanced Health Products is the best place to shop online for this.

Remember to always speak with your doctor before trying anything new.  If you feel a deep sadness, or experience thoughts of harming yourself, please reach out to family and friends immediately, or call the National Suicide Prevention Lifeline at 1-800-273-8255.

This website contains general information about medical conditions and treatments. The information is not advice, and should not be treated as such.

The information in this article is intended for informational purposes only and not intended to diagnosis, cure, or treat any healthcare issue.

Our products have not been approved by the FDA and should not be considered for use as a nutritional supplement.

Please consult your doctor or other appropriate medical professional before adding CBD or any of our products to your routine.